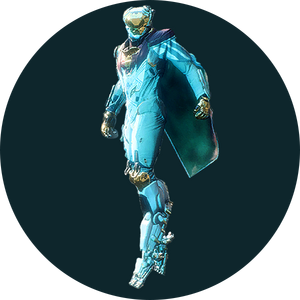 Valkyrie is a javelin that utilizes seals to channel the Anthem of Creation to control the elements. Valkyries can be used only by highly skilled Dominion pilots only. These javelins have powerful elemental abilities that can easily flush out enemies behind cover.

Valkyries are javelins developed by the Dominion. It is unknown when these javelins were first made, as there is nearly half a millennium’s gap between the founding of Sundermark and Stralheim, and the present day. During this time, very little was known about what happened to them, and they were presumed dead.

Seals were created by the Dominion. However, it is unknown whether it happened before or after the cataclysm that brought Scars to Coda in 413 LV. The first Valkyrie javelin was seen between 413 LV and 458 LV in Bastion. Their numbers were very few during this time. Only a few lancers such as Sol and Jani had ever witnessed these new types of javelins. The first real encounter with the Valkyrie javelins was during the Dominion’s invasion of Freemark. After the fall of Freemark, the Arcanists from Bastion worked on reverse engineering Seal technology and the Valkyrie javelin to create the Storm.

Valkyries are seen throughout Northern Bastion ever since the Heart of Rage was unleashed. After the destruction of Freemark, newer variants of Valkyries, some specializing in a particular element, and others mastering all three have surfaced. It is unknown whether Valkyrie lancers use cyphers to improve their functions, but they claim to be very focused and unperturbed by the Anthem of Creation.

There are several types of Valkyries that do different types of elemental damages:

Valkyries do not use any hand-held weapons, although they may use speceial melee weapons like a spear. They can hover indefinitely unless they are grounded by force, burning them or freezing them.

Valkyries have one purpose during combat: making sure hiding enemies are brought out of cover.

Valkyries are exclusive to the Dominion faction. They are almost always painted white and black, with heavy gold-plated accents. Some Valkyries are shown to have different designs such as Valkyrie Kelrik and Vara Brom between the same order.

All Valkyries have a cape that assists them with flight. These capes can be vividly colored and designed. As of now, red, blue, white, black, and gold capes have been seen on various occasions.

These are the most prominent users who are shown equipping the Valkyrie in any Anthem related media.