Male
The Monitor is a special operative who leads the Dominion forces in Bastion. [2] He is unique in that he is capable of functioning as both a Cypher and a Lancer simultaneously.

The Monitor claims to have witnessed firsthand the destruction of civilizations in the world due to the Anthem of Creation.[3] In the current day, he plans to use the Anthem for his own destructive desires,[4] though claimed that with its power under his control, he could bring an end to humanity's suffering.[3]

Ten years prior, the Monitor was part of the Dominion's assault on Freemark. Once they breached the chamber containing the Cenotaph, the Monitor shielded Doctor Harken from Freelancer Jani, who was forced to flee with a civilian girl. Subsequently, when Harken's failed attempted to use the Cenotaph to control the Anthem resulted in the Heart of Rage, the Monitor somehow managed to survive the Cataclysm.

In the present, the Monitor is involved in an incursion into Bastion and interrogates a Regulator, who was in fact a Corvus agent, into giving up the Shaper relic in her possession. Once his soldiers had found it, he executed her, provoking the Freelancer to come out of hiding and open fire. Casually shielding himself, the Monitor dismissed the Freelancer as a threat and left the job to his soldiers. Eventually, after the Freelancer defeated all his soldiers, including his lieutenants, the Monitor cuts in on the Freelancer's link with Owen Corley and mocks the Freelancer before cutting the connection when his foe tried to mock him.

The Monitor later appeared before the Freelancer via cypher projection when they had just found the tomb of General Helena Tarsis. He proceeded to converse with the Freelancer, offering to spare the people of Bastion in exchange for the Javelin of Dawn so that he might control the Anthem of Creation, all the while trying to trace the Freelancer's location. Once Faye Navine warned the Freelancer what he was up to, they lied that there was no javelin and walked through his projection, causing it to vanish.

The Monitor's offer was later taken by Owen, who double-crossed the Freelancer to steal the Javelin of Dawn. However, the Dominion later discovered that the Shield of Dawn lacked Tarsis' signet for it to function in the Heart of Rage, so Owen's face was scarred, though he managed to get away with the Javelin of Dawn.

In the Cataclysm update, The Monitor's real name is revealed: Armas Brom. He is the brother of Vara Brom.

"He's ruthless, driven, and savage, an incredibly powerful cypher and a brilliant pilot. He frightens even his own people"
– Tassyn about The Monitor

True to Tassyn's description about him, The Monitor is a ruthless and driven in his ambition to claim the power over Anthem, so much that his own allies feared him. He also able to remain uncannily cool under pressure no matter the situation, along with great deal of confidence to the boot. However, Harken describes him as unnecessarily hasty just like his sister. 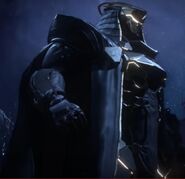 Ditto
Add a photo to this gallery

Retrieved from "https://anthem.fandom.com/wiki/The_Monitor?oldid=26373"
Community content is available under CC-BY-SA unless otherwise noted.