The Javelin of Dawn 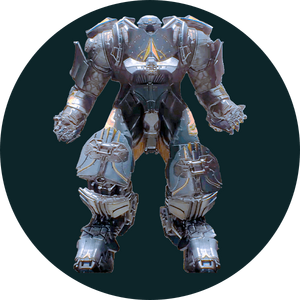 The Javelin of Dawn

Voice of Heaven
The Javelin of Dawn is the first javelin to be invented. It is also the most powerful javelin ever built. It's true capabilities remain a mystery,a nd it is said that not even its creator knew of its true extent.

When humanity was fighting the Urgoth, they eventually built a stronghold to keep them safe. Their leader, General Helena Tarsis requested her Legionnaire, the inventor Arden Vassa to build her a weapon to overpower the mighty overlords. Arden Vassa, with is knowledge of embers and gateway created a suit of armor that would become this weapon. It was called a Javelin, and the very first one, the Javelin of Dawn.

The true capability of this new weapon was first tested when the Legion members were hunting. This javelin equipped by Tarsis was used to silence cataclysms, defeat monsters, and eventually, defeat the Urgoth, freeing humanity.

When Tarsis passed away, Vassa locked the Javelin of Dawn deep inside the Fortress of Dawn, and the only way to reach it was to endure a daring gauntlet. But the javelin would not function properly without the General’s signet, which was hidden inside her tomb by Liatrelle, her best friend.

In the year 468 LV, a Freelancer, a Strider Pilot, and two cyphers went on a quest to locate the General’s Signet and the Javelin of Dawn to silence a cataclysm called Heart of Rage. After the signet was found, it was determined by one of the cyphers that the General’s javelin was inside the Fortress of Dawn. The Freelancer opened the fortress through Tarsis’ signet and endured three trials set by Arden Vassa—one each for Might, Resolve, and Valor—through a gating device.

There is only one Javelin of Dawn and there ever will only be one. However, there are the javelins that became its successors:

The Javelin of Dawn’s prowess is only witnessed through slideshows in the Anthem Legion of Dawn trailer. The only other instances of it being used, which is very clumsily, does not do it justice.

The true prowess of the Javelin of Dawn remains unseen. But from the Anthem Legion of Dawn Trailer[1], the Javelin of Dawn is very capable of handling multiple enemies at once. The javelin can use a melee weapon, a sword, which has not been seen in-game. It also has a very powerful ultimate ability.

From the in-game cut scenes during the missions, Fortress of Dawn and Freelancer Down, the Javelin of Dawn can project powerful energy blasts and take on a whole colossus and throw it away, while the pilot is still inside it. This shows how powerful this javelin is.

From the stories of the Legion of Dawn, the following can be concluded about the Javelin of Dawn:

There is only one Javelin of Dawn. It is painted steel blue all over. It does, however, have gold patterns that showcase the Legion of Dawn’s symbols and designs. The color of the helmet’s eyes glow orange red.

These are the most prominent users who are shown equipping the Javelin of Dawn in any Anthem related media.

Lightning Ability of the Javelin of Dawn