Support abilities are used to assist user and ally Javelin to perform better during combat. They are usually categorized as Gear 3 and occasionally called Support Gear, even though Ranger's support is also called Support Gear by default.

There are a total of 8 lower level and 8 upgraded supports. The total support abilities when considering rarities and maximum power levels is 48.

Note: The icon used here is only to differentiate between Gear 1 and Gear 2. There is only one gear icon used in the game. Look at Gallery for the correct representation used in-game.

Apart from the rarity of the supports, there are two types of Support gears for each javelin:

Defensive Support abilities are used to guard javelins from the incoming enemy attacks or improve a javelin's survival capabilities.

The Ranger Deploys a barrier or a field around allies or itself to provide support.

The Colossus unleashes an attention drawing noise or a surge of shielding energy around its allies.

The Storm casts a wall of barrier or a field around itself or its allies to support them.

The Interceptor lets fly a weakening beacon or a sound wave of energy to support its allies. 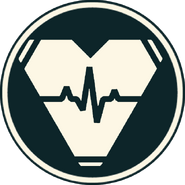