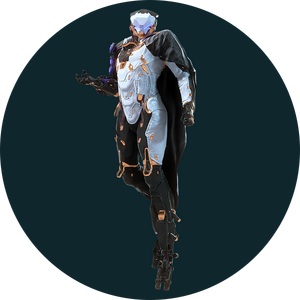 Storm is a mysterious javelin that channels the Anthem created in Bastion.

Storm is mostly favored by specialized and veteran Freelancers. Other factions are not known to use this javelin as much in Bastion.

The Storm channels the raw energy of the Anthem through its seals to hover over the battlefield and dish out damage. With its powerful seals and minimal armour, the Storm is a tempestuous javelin that can challenge the skills of even a veteran lancer.[1]

This page is about Storm Javelin that is most commonly called Storm. Click here for the Shaper Storms and Cataclysms.

Like other javelins, Storm is made in Heliost. Its originally based on the Valkyrie javelin used by the Dominion, the first of which were witnessed during their incursion of Freemark in 458 LV. Bastion’s Arcanists then studied and recreated the Valkyrie javelin into the more capable Storm by incorporating additional seals. However, in this process, Storm lost the ability to hover infinitely.

It has been less than a decade since Storm has become available for lancers to use. Only through painstaking arcanist research has anyone outside the Dominion had a chance to wield the Storm’s awesome potential.

These are the other variants of the Storm Javelin:

For hints on how to use Storm, see Storm Hints. Storm has the following combat abilities:

Storm is a specialized javelin. Like all javelins, it can be used in multiple ways. However, its default version is designed to do specific tasks [2].

Storm has several customization options along with paint jobs:

Storm Requires Storm Parts to craft its javelin specific gear, melee weapons, and components along with other standard crafting items obtained by harvesting. It can also use universal components and guns.

A Storm has a total of 12 combat slots available to it to make its performance optimal. There is also one special slot specific to the story:

Depending on the rarity of the embers used, items of different rarity can be crafted or obtained by other means such as Guardians Gifts, Regulator Store, Loot, or Seasonal Store. These items have a specific level called Power, that is capped at different numeric values. When the Power of each equipped item is added, Storm’s Power Level is obtained. This Power Level defines the rarity of Storm:

There are many, many users of this javelin. However, these are the prominent people known to have used it: