Anthem Wiki
Register
Don't have an account?
Sign In
Advertisement
in: Fort Tarsis locations, Cataclysms, Echoes of Reality,
and 5 more 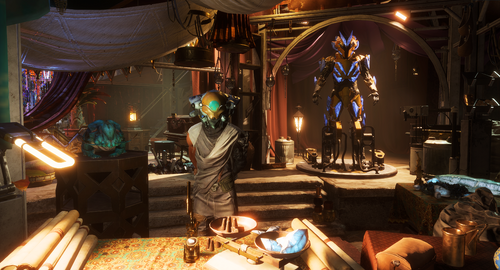 The seasonal Store was a limited time store which sells special items during the Cataclysms.

Starting from Update 1.7.0, the Seasonal Store became permanently available in the game.

This store sells a wide variety of War Chests through which the player can unlock Masterwork items of Power Level 66 with a chance of getting Legendary items at Power Level 80. These items include gears, Universal Components, and Weapons. However, only weapons and gears released during the Echoes of Reality during update 1.3.0 are available in these war chests.

The guns obtained in these War Chests are unique and currently not obtainable in the game by any other means.

The currency used in the store are crystals, which can only be obtained by playing various game modes and completing challenges. The store also converted major and minor crystals for purchasing the items until update 1.5.0.

During the Echoes of Reality cataclysm, Season of Skulls and Icetide of 468 LV, the store was owned by the augur called Herschel.