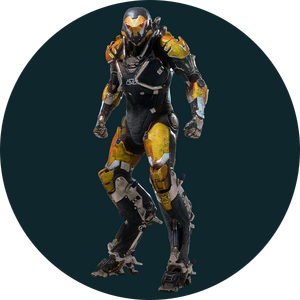 Micro-Missiles
Ranger is a versatile javelin created in Bastion.

Ranger is an all time favorite of lancers who like balance. It is also the most popular javelin for exploration. So popular, that the people of Bastion have made 3 variants of the Ranger!

Piloted by both Freelancers and Sentinels, this iconic suit's versatility is what makes it deadly. With strong offensive capabilities, respectable defense, and something in its arsenal for every situation, the Ranger is the jack-of-all-trades a squad needs.[1].

This page is about Ranger Mark Two Javelin that is most commonly called Ranger. Click here for the Ranger Mark One.

Like most items on Bastion, Ranger was designed and created in Heliost. The model that Freelancers and several Corvus agents use is called Ranger Mark Two, usually stylized as Ranger Mk.2. Sentinels are known to use Ranger Mark One, since they are usually inside the walls of cities. But Sentinels can also use the Mk.2. Models.

There is also a hybrid and modified model created using the Mk.1 and Mk.2 Rangers that Outlaws equip. Usually only the skilled outlaw pilots or outlaw gang bosses equip them, and they are called Outlaw Lancers. It is considered its own javelin.

The Ranger Mark Three is a new variant, not yet available as of Icetide of the year 468 LV. The Freelancer used a new Ranger Mk.2 once their training was complete. However, it was severely damaged during the mission to Silence the Heart of Rage in 466 LV. Between 466 LV and 468 LV, they obtained another Ranger Mk.2 Javelin, which was severely worn out and hindering in performance. However, because of an interest shown by Corvus, who persuaded them to figure out a method to silence the Heart of Rage in 468 LV, they obtained brand new models of Ranger, Colossus, Storm, and Interceptor javelins.

These are the other variants of the Ranger Javelin:

Ranger has the following combat abilities:

Ranger is a multi-purpose javelin. Like all javelins, it can be used in multiple ways. However, its default version is designed to do specific tasks[2].

Ranger has several customization options along with paint jobs:

Ranger Requires Ranger Parts to craft its javelin specific gear, melee weapons, and components along with other standard crafting items obtained by harvesting. It can also use universal components and guns.

A Ranger has a total of 12 combat slots available to it to make its performance optimal. There is also one special slot specific to the story:

Depending on the rarity of the embers used, items of different rarity can be crafted or obtained by other means such as Guardians Gifts, Regulator Store, Loot, or Seasonal Store. These items have a specific level called Power, that is capped at different numeric values. When the Power of each equipped item is added, Ranger’s Power Level is obtained. This Power Level defines the rarity of Ranger: