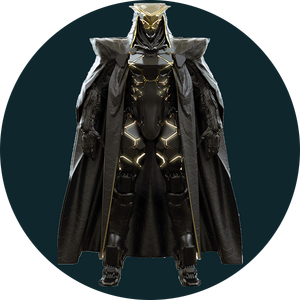 Monitor is a highly specialized javelin used only by the Dominion. Only humans with cypher abilities can pilot it, and even then, they must be highly skilled.

Monitor is a specialized javelin used by only a handful of secret operatives working under the Dominion. Monitors are so rare and powerful that they have only been seen in Bastion thrice—two of them were the same person—performing confidential activities.

Monitor javelins are heavily embedded in seals all over their body and equip a cape. It is unknown when these javelins were created. They have seals larger and more powerful than a Valkyrie. It is a known fact that to become qualified as a Monitor, one not only has to be an excellent pilot, but also a talented cypher.

Between 413 LV and 457 LV, there has been one instance of a Monitor being shown. His purpose was to locate a girl dressed in white, lost in the wilderness. He did not succeed, but his fate is ultimately unknown.

In 458 LV, another Monitor, one that later identified as Armas Brom, showed up along with a Dominion Arcanist to take control of a Shaper Relic called Cenotaph. The two failed, but created one of the largest cataclysm known to humans. Ten years later, in 468 LV, he returned to weaponize the Cenotaph because the Dominion were under siege around their Northern borders by the Urgoth. Unfortunately, in this process, he failed not only to weaponize it, but also succumbed to the Anthem of Creation, becoming a Shaper Corrupted Creature he ironically referred as his transcended form. Although he was defeated by the Freelancer, who also silenced the Heart of Rage, his fate also remains unknown, while his sister believed him to have perished during the battle. It is very likely that Corvus has collected his Javelin for study.

There are no known variants of the Monitor javelin.

Monitors javelins are extremely dangerous. However, there are no known instances of combating with them. There are three times they are shown using their prowess: First, they use a psycho-kinetic ability that induces pain in their victim, the second, they send out an energy blast that instantly kills a human, the third is during the invasion of Freemark where a Lightning ability is used. It is quite possible that all three elemental damage types are available to this javelin. The Monitor is also seen projecting a barrier to stop all incoming attacks on allies.

Monitors are specialized secret operatives. They command the Dominion forces deployed in a region and are supposed to be significantly powerful than other Dominion forces. Their true skills haven't been shown in-game.

Monitors are exclusive to the Dominion. In both the cases where this javelin was shown, it was painted in black, but also plated with gold accents. Other than that, the javelin itself is very unique in design, and has a more regal cape, covering both its shoulders, and not just one like the Valkyries.

The two Monitors shown have slight differences in their seals: one has seals that are bordered in gold, while the other in bright blue. This could just be artistic differences as both are from two different forms of media.

These are the most prominent and only known users who are shown equipping Monitor in any Anthem related media.

Monitor's Size when Compared to Humans

Monitor in a Dominion Hideout