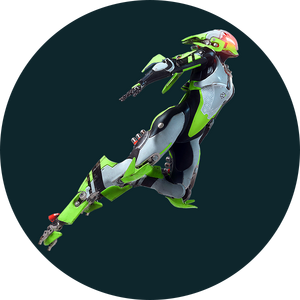 Interceptor is a versatile javelin created in Bastion by Corvus.

This javelin is available only to the most skilled Freelancers, Corvus agents, and certain other lancers, and made available by the Corvus faction for diplomatic and covert missions of Bastion. With powerful blades and a full suite of devastating abilities, the Interceptor is both incredibly self-reliant and excellent at providing support to the squad. As with all technology, the Regulators have also stolen this javelin's design and modified it.

The Interceptor excels in getting close to deal damage to enemies, then dashing away before they can react. Unleashing lightning-fast maneuverability to pull off powerful offensive abilities, the Interceptor makes the impossible look easy.[1].

Like most items on Bastion, Interceptor was designed and created in Heliost, but with the help of Corvus.

Thought to be the toughest javelin to master, interceptor is the most agile and acrobatic javelin a lancer can use. In the right hands, the Interceptor's speed is unmatched. Although provided by Corvus to the most skilled lancers of Bastion, Regulators are known to possess a few models of Interceptor with them. It is very likely they stole or repurposed abandoned javelins.

Interceptor is the only javelin that does not have any known variations, making it the most unique among all javelins available to the lancers of Bastion.

The Regulators have stolen Interceptor technology and may have made modifications to the way the javelin functions with special ember rings. This isn't explicitly shown in-game, but is given a lot of emphasis in the lore through Bountiful Hunt, a short story.

Interceptor has the following combat abilities:

Interceptor is a nimble javelin. Like all javelins, it can be used in multiple ways. However, its default version is designed to do specific tasks [2].

Interceptor has several customization options along with paint jobs:

Interceptor Requires Interceptor Parts to craft its javelin specific gear, melee weapons, and components along with other standard crafting items obtained by harvesting. It can also use universal components and guns.

An Interceptor has a total of 12 combat slots available to it to make its performance optimal. There is also one special slot specific to the story:

Depending on the rarity of the embers used, items of different rarity can be crafted or obtained by other means such as Guardians Gifts, Regulator Store, Loot, or Seasonal Store. These items have a specific level called Power, that is capped at different numeric values. When the Power of each equipped item is added, Interceptor’s Power Level is obtained. This Power Level defines the rarity of Interceptor: