The story takes place decades before the main story of Anthem.[1][2] It occurs in Northern Bastion and in Fort Tarsis. There are several new locations shown, especially with the Dominion, that aren't from Northern bastion or from Stralheim, as the latter is a frozen land.

The order is taken from the credits: 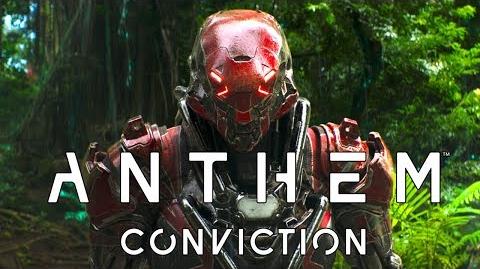 This story is about a Girl in White who is mysteriously found outside the walls in the jungle by a Freelancer. The Freelancer brings her to Fort Tarsis after rescuing her.

Meanwhile the Dominion are on the hunt for the same girl, and torturing people to find her whereabouts.

After several mis-adventures of fighting against Scars and Dominion, rescuing missing people, making friends, and betrayals, there comes a point in time where the mysterious girl is trapped in a Shaper storm on the verge of being consumed by the Anthem of Creation.

The Freelancer is on a quest to rescue her.

On Jul 25, 2019, Oats Studio released a video on the making of Anthem: Conviction.