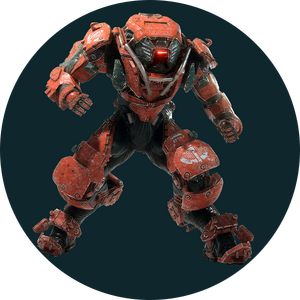 Colossus is a heavily armored javelin created in Bastion.

Colossus is one of the first javelins to be created in the legion Victorious Era. As with all Bastion technology, colossus' technology is stolen by regulators and modified. Piloted by Freelancers and Engineers, this iconic suit's strength makes it the most powerful javelin available. Colossus is a hulking war machine designed to clear out entire hives of vicious predatory fauna with mounted artillery, heavy arms, and reinforced armor plating.

If you think subtlety is overrated and want enough artillery to take out a small army, unleash the pure devastation of this hulking war machine. While each javelin can equip two weapons, the Colossus is the only javelin sturdy enough to wield any of the Heavy Weapons.[1].

Like most items in Bastion, Colossus is designed and Crafted in Heliost.

Colossus is based on the earliest javelins made by humans, the javelins equipped by Legion of Dawn lancers. Since then, it has been improved to make it effective not only for combat, but also a myriad of occupations.

These are the other variants of the Colossus Javelin:

Colossus has the following combat abilities:

Colossus received new changes to its health during update 1.3.0.

The Colossus will now utilize the same base values of Armor and Shields as the rest of the javelins, but has an inherent multiplying factor on all base values that generates the larger Armor and Shield pools. This change will better allow the Colossus to utilize Universal components without sacrificing an extraordinary amount of defense to do so.

Note: Because of this change, inside the forge, the base value of the Colossus specific components will go down significantly but the amount of armor added to the Colossus should remain roughly the same (since that lower base value is multiplied by the Colossus’s new inherent bonus).

These changes have made Colossus a nearly un-killable tank.

Colossus is a heavy javelin. Like all javelins, it can be used in multiple ways. However, its default version is designed to do specific tasks [2].

Colossus has several customization options along with paint jobs:

Colossus Requires Colossus Parts to craft its javelin specific gear, melee weapons, and components along with other standard crafting items obtained by harvesting. It can also use universal components and guns.

A Colossus has a total of 12 combat slots available to it to make its performance optimal. There is also one special slot specific to the story:

Depending on the rarity of the embers used, items of different rarity can be crafted or obtained by other means such as Guardians Gifts, Regulator Store, Loot, or Seasonal Store. These items have a specific level called Power, that is capped at different numeric values. When the Power of each equipped item is added, Colossus’s Power Level is obtained. This Power Level defines the rarity of Colossus: